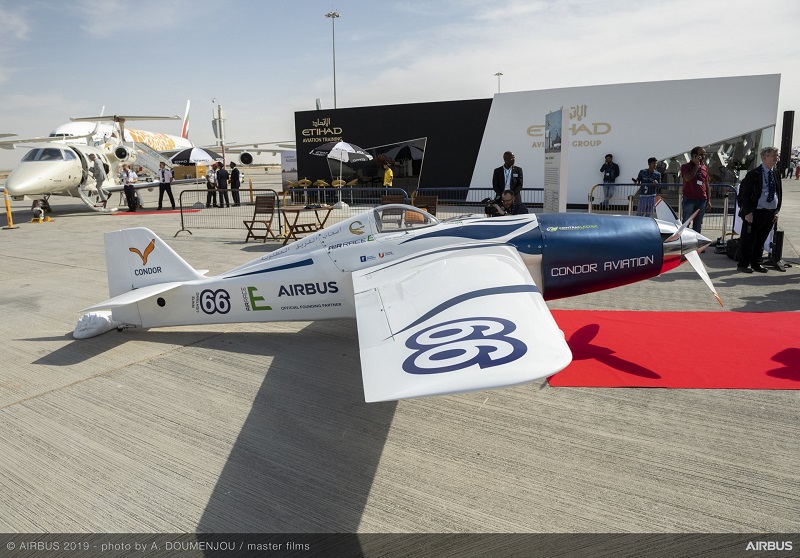 This Is The First e-Racer Set To Compete In Air Race E. Image Credit: Airbus Media 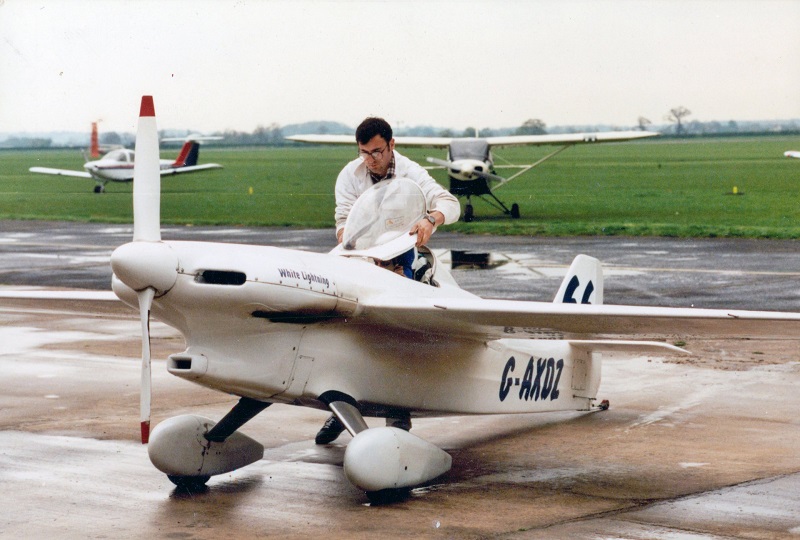 The e-racer model from Team Condor Aviation is a retrofit of the winning “White Lightning” aircraft from formula one races of the 1980s and 1990s. The 2019 Dubai Air Show marks the e-racer’s first public appearance in anticipation of the inaugural competition of the Air Race E racing series.

The year was 1979. In the workshop of a builder in Midlands, UK, a standard slab-wing Cassutt aircraft was being transformed from nose to tail. The objective? To build an air racing machine that could compete in formula one air races. By 1980, the reconstruction was complete, and the new aircraft, named “White Lightning,” was launched on the air race circuit by its owner-pilot Andrew Chadwick.

Throughout the 1980s and 1990s, White Lightning raced in both handicap and formula one races—several races per year, in fact. Chadwick introduced air racing to continental Europe, travelling with White Lightning to places such as Epernay, France and Freiburg, Germany. In Compiègne, France, White Lightning achieved new levels of celebrity when a pigeon famously flew right through its wing from top to bottom!

By the end of two exhilarating decades in air racing, White Lightning had been twice crowned a champion—in Meaux, France and in Rochester, UK—then fell into retirement. But this did not last: a new life was quietly hovering on the horizon.

A repeat of history for the racer formerly known as White Lightning?

Today, hopes abound that the racer formerly known as White Lightning will repeat its winning history, but in a completely different format.

Martyn Wiseman, the lead from Team Condor Aviation, took ownership of White Lightning—an older Cassutt model but still very popular in traditional formula one air racing. The model has an airframe comprised of a welded-tube-steel fuselage and fabric-covered wooden wings. The fuel tank was positioned behind the engine—like in many aircraft.

As part of the retrofit for Air Race E, Team Condor Aviation has completely gutted the piston engine and swapped in Contra-Electric’s twin-motor, contra-rotating-propeller powertrain that provides continuous electric power. The fuel tank has been replaced with a ~20 kWh battery.

For Martyn and his team, the major engineering challenge with the retrofit is finding the right balance between weight and power distribution. Specifically, the electric motor has the potential for a relatively high power-to-weight ratio compared to the original piston engine.

“The first step is to retrofit the aircraft with commercially available components to try to replicate the original performance,” explains Martyn. “As a second step, we will design a custom propulsion system to ensure the airplane is ready to race.”

Leveraging the galvanizing effect of a sporting competition

Like Team Condor Aviation, other teams signed up to Air Race E are currently developing their own aircraft using existing airframes—or from scratch.

This approach is completely in line with air racing culture in which teams are heavily involved in designing and building aircraft. In fact, the current teams—ranging from professional engineers and aerospace engineering students to hobbyists—will be free to build and fly their own designs as long as they conform to specifications defined by Air Race E. These specifications relate to a variety of characteristics—including wing area, maximum power rating and battery capacity, among others.

Ultimately, the end product for each team will result in an all-electric, fixed-wing and front-engine aircraft. Because Air Race E has the same course layout and eight-lap configuration as traditional air races, the aircraft will need to be of similar size and comparable performance to classic racing planes.

“The design freedom allowed in Air Race E should give rise to some interesting concepts for electric airplanes,” says Jeff Zaltman, CEO of Air Race E. “And the galvanizing effect of a sporting competition should help to push the technology development of electric flight in the right direction.” 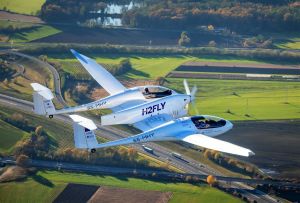