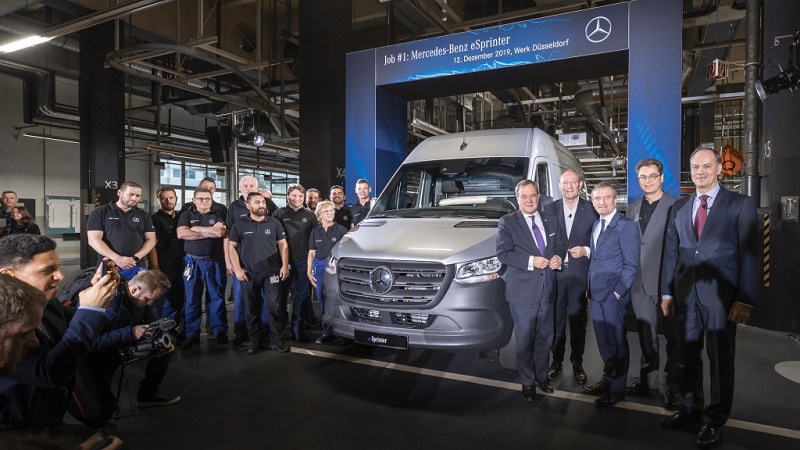 The Stuttgart-based manufacturer has been building its globally successful vans in Dusseldorf since 1962. Ever since, the plant has continually developed to become in recent years the leading Sprinter plant worldwide and to serve as a benchmark for the other locations. The implementation of future-oriented technologies and production methods as well as their consistent testing benefits the entire production network of Mercedes-Benz Vans.

More than 4.6 million vehicles have been produced in Dusseldorf to date. Since 2018, production of the new Sprinter has also taken place there, with over 200,000 units having already left the assembly line, ready to enter into their daily service all over the world.

The production of the fully electric eSprinter marks the beginning of a new era in Dusseldorf. Building the eSprinter in Dusseldorf is a next step for the future of the plant and for the manufacturer itself. Over the past years, already in advance of production of the new Sprinter and the new drive system variants, Mercedes-Benz Vans has invested a total of around 330 million euros in the technical expansion of production, while taking into account the fact that, in future, the manufacture of both conventionally operated and fully electric vehicles will be built on a single production line. The result will be enormous flexibility and the ability to meet both customer and market requirements.

Besides the comprehensive investments in the production systems, the plant has also been massively investing in the basic and advanced training of its own employees. Since the decision was made to build the eSprinter in Dusseldorf, the plant has become the competence center for electric drives and has developed the requisite expertise. To date over 2,400 employees have been trained for handling and assembling the high-voltage technologies. 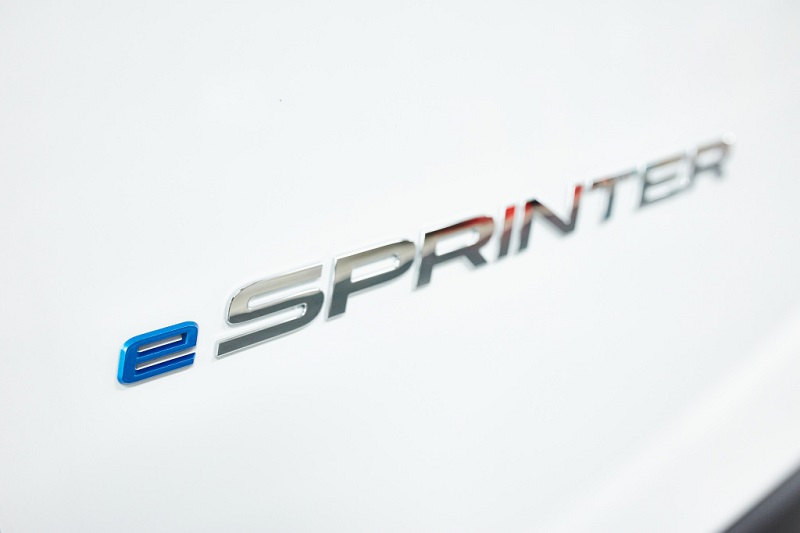 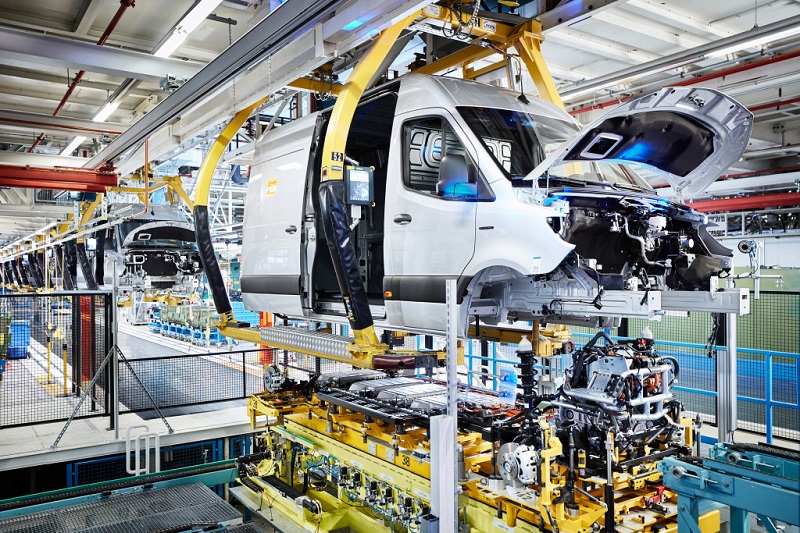 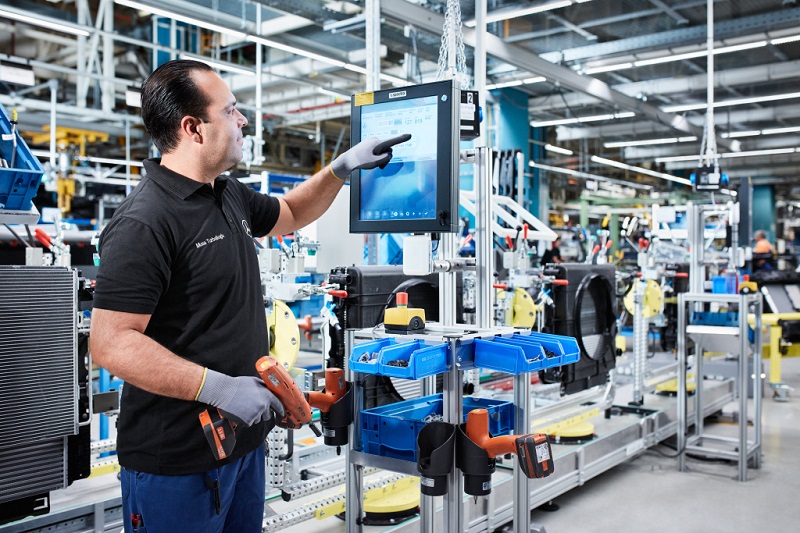 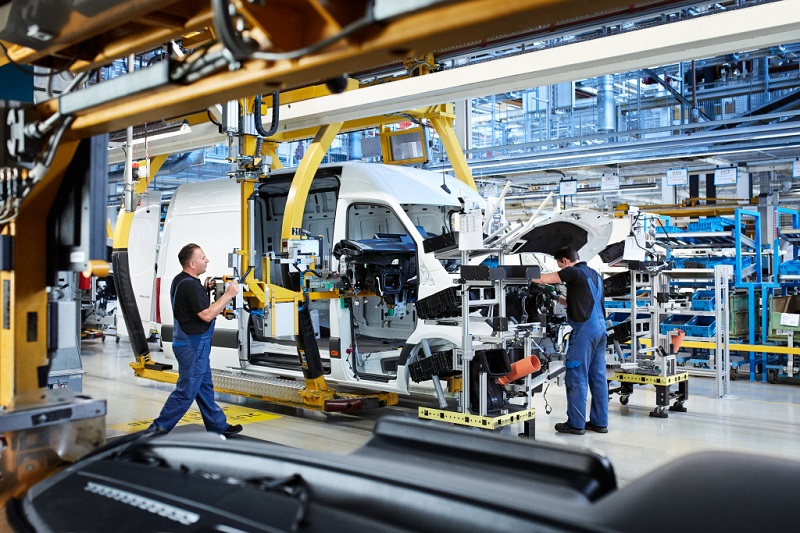 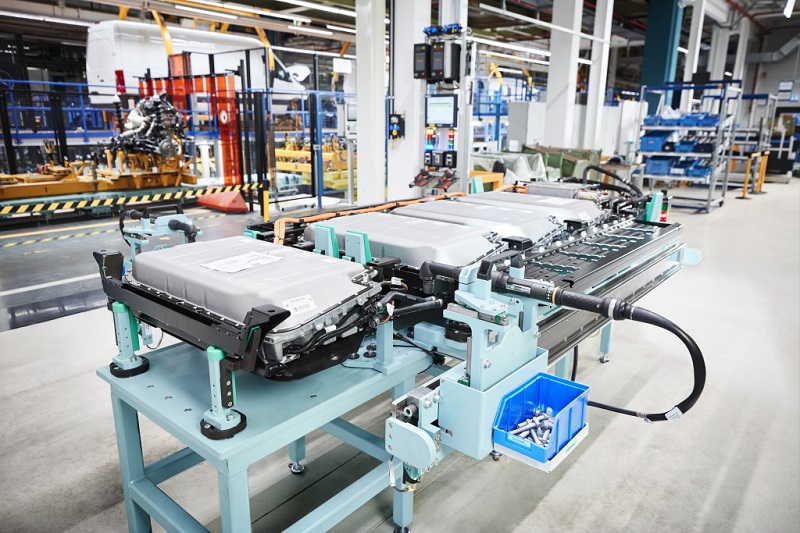 Mercedes-Benz Vans banks on sustainability not only in the products that it consistently electrifies and further optimizes, but in particular in its own production as well. The goal is to make all van production CO2-neutral by 2022. To this end various measures have been initiated as part of the so-called green production strategy: energy purchasing at the Dusseldorf plant has also been consistently switching to green energy, and from 2022 electric power is to be procured from 100 percent renewable sources only. The CO2 balance sheet of transportation within the plant is also being addressed: at present, new mobility systems, such as on-demand plant shuttles, are being implemented in Dusseldorf. In addition, since 2012 the Dusseldorf plant has already been a paperless factory and is increasingly relying on automatically guided fuel-cell vehicles. All these measures supplement one another and promote the speedy realization of the ambitious objectives set by the plant itself, to make a lasting contribution to climate protection.

The Mercedes-Benz eSprinter is intended to cover the broadest possible range of use in urban mobility. Accordingly, it is initially being offered as a panel van with high roof and a permissible gross weight of 3,500 kilograms. Its maximum loading volume is 10.5 m3, the same as for the Sprinter with combustion engine. Similar to the entry-level diesel engine, the electric drive in the eSprinter drives the front wheels with an output of 85 kW and a torque figure of up to 300 Newton meters.

A flexible payload and battery concept moreover allow adaptation to individual needs for practical use as the customer can choose between three or four battery units. Equipped with a battery capacity of 55 kWh, its range is an estimated 168 kilometers [1], [2] with a maximum payload of 891 kilograms. A second battery option takes into account other priorities in the use parameters: three instead of four battery units with a capacity of 35 kWh allow a range of around 115 kilometers 1, 2. In return, the maximum payload increases by around 140 to approximately 1040 kilograms. The integrated fast-charging function provides for more flexibility; 80 percent of the battery charge can be replenished within 30 minutes. The maximum speed can be configured to suit the task at hand: the top speed can be set at 80 km/h, 100 km/h or even as high as 120 km/h, if speed is essential. 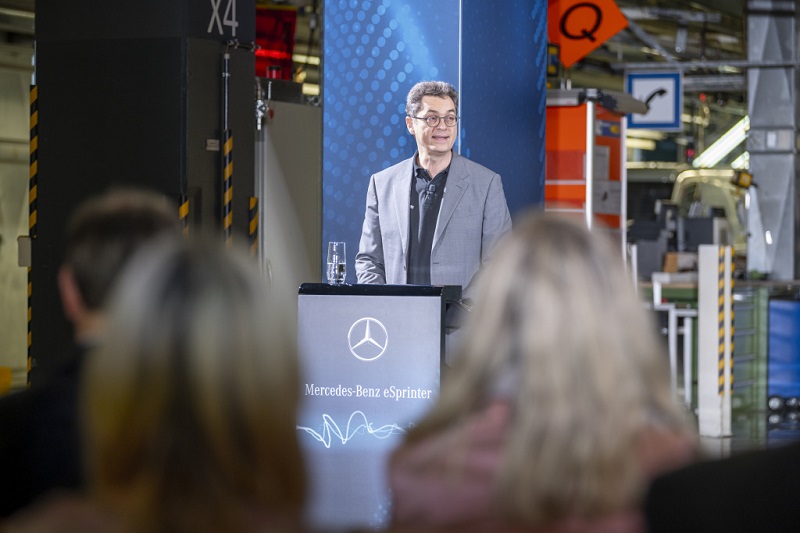 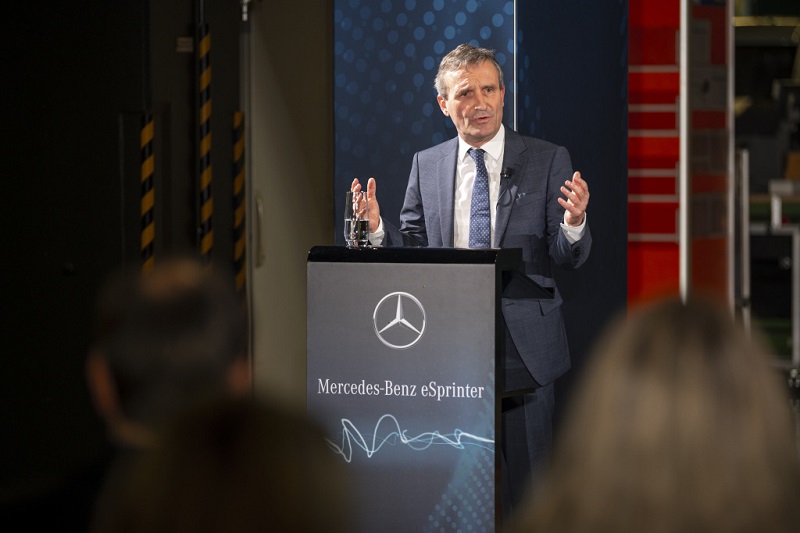 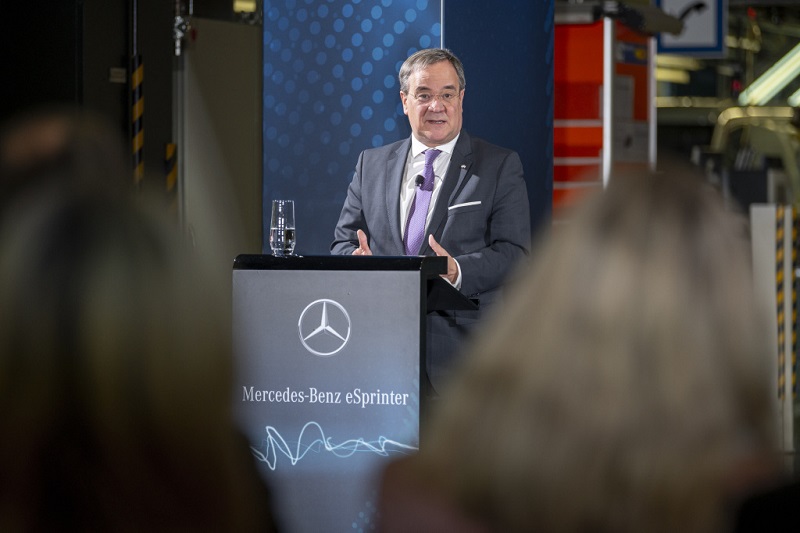 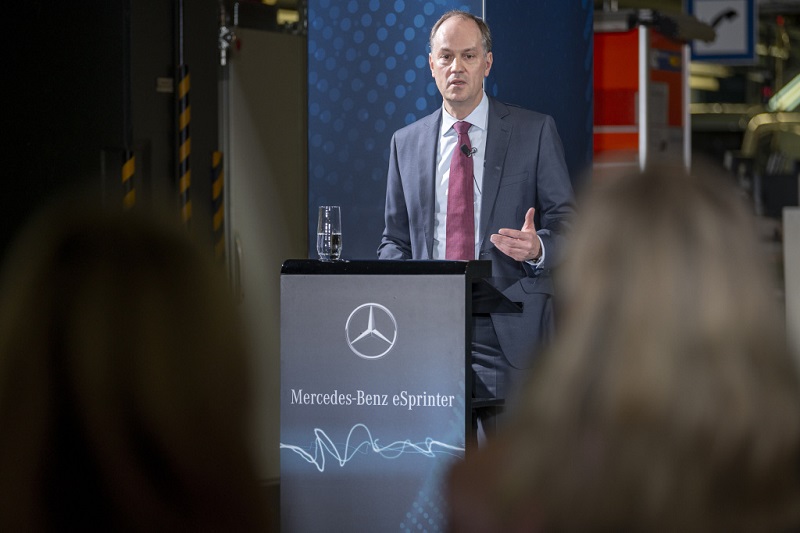 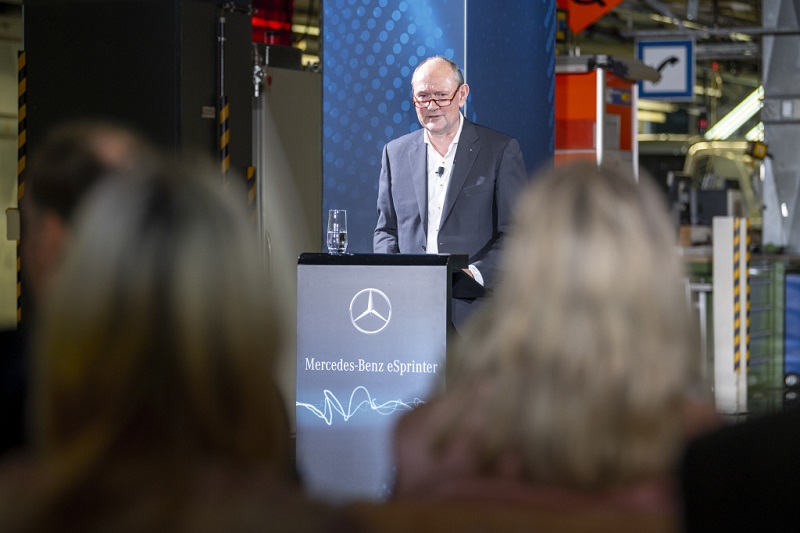 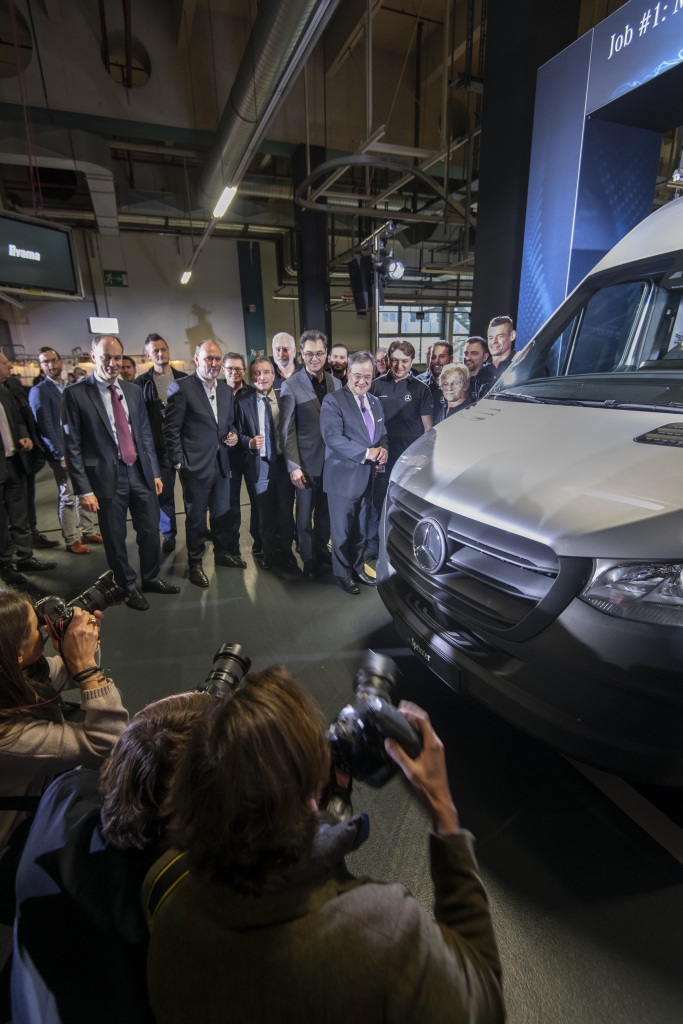 “The automotive industry is a central pillar of our economy and stands for innovation like no other sector. In North Rhine-Westphalia alone, 200,000 people work in about 800 companies. One third of all German automotive suppliers is at our home. To sustain this value chain, we need to push the transformation of the industry. Therefore, the state government has the goal of making North Rhine-Westphalia a pioneer, driver and catalyst of electromobility. On the way to a sustainable change in traffic and more effective climate protection, we want to make our state the lead provider and -market for electromobility along the entire value chain. This ranges from the research production battery cell in North Rhine-Westphalia to innovative solutions from suppliers to the production of sustainable automobiles like the eSprinter. The fact that Mercedes-Benz has the electric Sprinter produced at its largest transporter plant in Dusseldorf worldwide strengthens the location and is another example of innovative electric mobility ‘made in North Rhine-Westphalia’. This decision fits in perfectly with our goals for maintaining a competitive automotive industry of the future.”

“The Mercedes-Benz plant in Dusseldorf is one of the most important employers in our region and, for years, has been a guarantee for the attractiveness of our city. I very much welcome the decision to build the eSprinter here and appreciate how this decision will safeguard the future of the location.”

“We are continuing to stay on track: the start of production of our eSprinter marks a further milestone on our way to electrification. In the coming years, electric drives will come to prevail more and more and become a mighty pillar in our product portfolio, which above all will govern the urban, commercial sector.”

“The changeover of our products and production is essential for us as vehicle manufacturers. To implement this measure, we are building up our plants and investing – even in economically challenging times – to create the basis for our further economical success.”

“Of crucial importance in this regard is that we remain flexible in production, as customer requirements and market requirements continue to change.”

“The electric drive is a key technology for the mobility of the future, and today we are already prepared to bring this technology to the road. Dusseldorf is of central importance for our production, and consequently we quite deliberately started production of the new eSprinter here.”

“For integration of the eSprinter production we have extensively upgraded the plant. Altogether, we have carried out the modifications within one year and invested several million euros – a clear indication of our commitment to the site.”

Dr Armin Willy, Site Representative and Head of the Mercedes-Benz plant in Dusseldorf:

“We’re proud to be building the new eSprinter and therefore an important item in the mobility of the future in our plant. In the past years we’ve demonstrated our efficiency and our ability to integrate even advanced technologies and methods in our production fast and effectively. I firmly believe that in the coming years the eSprinter will develop into one of the most important products and therefore significantly help us here in Dusseldorf to remain a strong plant in the Mercedes-Benz organization.”

“The possibility of being able to build all drive variants in a single plant and in a single production line will help us remain competitive and flexibly respond to our customers’ desires and requirements.”

About the Mercedes-Benz plant in Dusseldorf:

The Dusseldorf Mercedes-Benz plant, established in 1962, is the world’s largest van plant of Daimler AG.

A production area of round 188,000 square meters (body shop, paint shop and assembly) encompasses the manufacture of the closed model designations of the Mercedes-Benz Sprinter – the founder of the large van segment. Production of the new Sprinter in Dusseldorf began in March 2018. Altogether, well over four million vans have been produced in Dusseldorf to date. As the lead plant for worldwide Sprinter production, Dusseldorf plays a leading role within the global production network of Mercedes-Benz Vans. With over 6,600 employees and around 145 trainees, the plant is one of the biggest industrial employers and trainers in the region.

[2] The actual range is furthermore dependent upon the individual driving style, the road and traffic conditions, outside temperature, use of climate control/heating system, etc. and may differ. 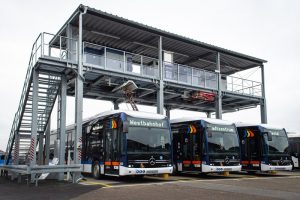 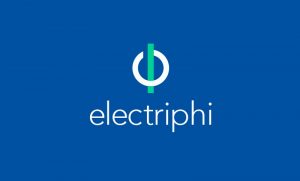 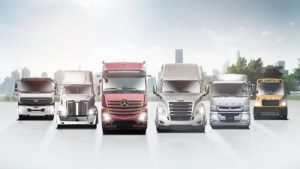