Bugatti Has Some Surprise In Store For 2020

Several outstanding models, a world record and a great 110th anniversary celebration. 2019 was an eventful year for the French luxury manufacturer of hyper sports cars. Bugatti celebrated its 110th anniversary in this year, making the company one of the oldest hyper sports car marques still in existence. Bugatti also developed several exclusive Edition models in what turned out to be a record year in all respects.

“We designed some outstanding hyper sports cars in 2019,” says Stephan Winkelmann, President of Bugatti. These included the Chiron1 “110 ans Bugatti”, a homage to the French homeland. There was also the “La Voiture Noire2”, for Bugatti enthusiasts the most exclusive, beautiful and valuable Gran Tourismo there is. It’s the haute couture of automotive engineering – elegant, powerful and unique. Since the summer, Bugatti has also referenced the Italian intermezzo of the Bugatti marque with the “Centodieci3”. At the same time, this is a nod to the Bugatti EB110, the super sports car of the 1990s.

Bugatti has stood for superlatives since it was founded. And also for performance in addition to luxury, quality and elegance. To back this up, in August a new derivative of the Bugatti Chiron1 became the first hyper sports car to break the magical 300 miles per hour limit by travelling at 304.773 mph (490.484 km/h), a world record set by the new Chiron Super Sport 300+*. “An extraordinary feat of engineering. Bugatti has once again shown what our employees are capable of. Never before has a series manufacturer achieved this high speed,” says Stephan Winkelmann.

Also in the summer, Bugatti customers from all over the world visited various stations in the life of Ettore Bugatti as part of a “Grand Tour” in the largest convoy of modern Bugatti hyper sports cars ever seen, consisting of 25 Veyrons and Chirons, before finally meeting up with other customers as well as hundreds of enthusiasts and all Bugatti employees for the “Grande Fête” in front of the Château in Molsheim. “This was an incredibly beautiful and emotional event, with lots of historical and current Bugatti models. It was simply unique,” enthuses Stephan Winkelmann even now.

“Although we’re proud to look back on our past, we’re looking forward to the future with purpose and pleasure. In 2019, we were again able to increase our production and also deliver more customized Chiron vehicles to our customers. This year, the first Divo1 modesl, a hyper sports car specially designed for lateral acceleration, will leave our studio in Molsheim,” explains Stephan Winkelmann. With the Divo, Bugatti has extended its longstanding tradition of coach-building, which involves placing specially designed bodies on an existing chassis. This is a concept which has received great interest. The small series, limited to 40 cars, is sold out even before the official world premiere. Moreover, production of the Chiron is planned through to the end of 2021, and fewer than 100 of the 500 hyper sports cars are still available.

The ultimate hyper sports cars from Molsheim are still the world’s most potent, high quality and luxurious vehicles, built by hand over many weeks and with loving attention to detail. The iconic 8.0-litre W16 with up to 1,600 PS remains the very epitome of engineering. Besides its incredible performance, this hyper sports car is easy to drive and also offers exceptional luxury, comfort and individuality.

Stephan Winkelmann promises further highlights in the model series for 2020. “We’re living in a revolutionary era. We will present further high-performance vehicles in 2020, because Bugatti remains true to its philosophy of developing the best cars in the world.” At the same time, Bugatti will retroactively make its locations worldwide and the kilometers driven by Bugatti vehicles CO2-neutral from 2018. This includes test drives, as well as all the kilometers driven by customer vehicles. “By doing this, we’re taking responsibility for generations to come and placing Bugatti in a sustainable position for the future,” says Stephan Winkelmann.

La Marque is followed by continuing speculation. Rumors revolve around new models and bear witness to the enormous passion of Bugatti enthusiasts worldwide. However, Bugatti will not reveal its plans for the year. “All I can say is this: we’ll be presenting a few interesting surprises in 2020. We have several ideas and are continuing to work on the future of our traditional marque,” promises Winkelmann. Always searching for aesthetic technology and perfection, very much in the spirit of Ettore Bugatti himself. 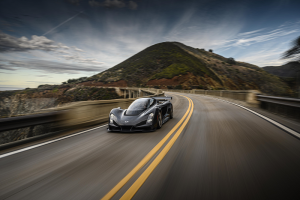 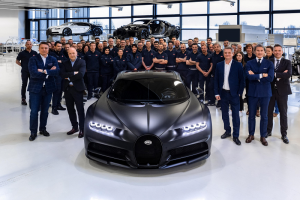 The Chiron’s Production Run Enters Its Second Half