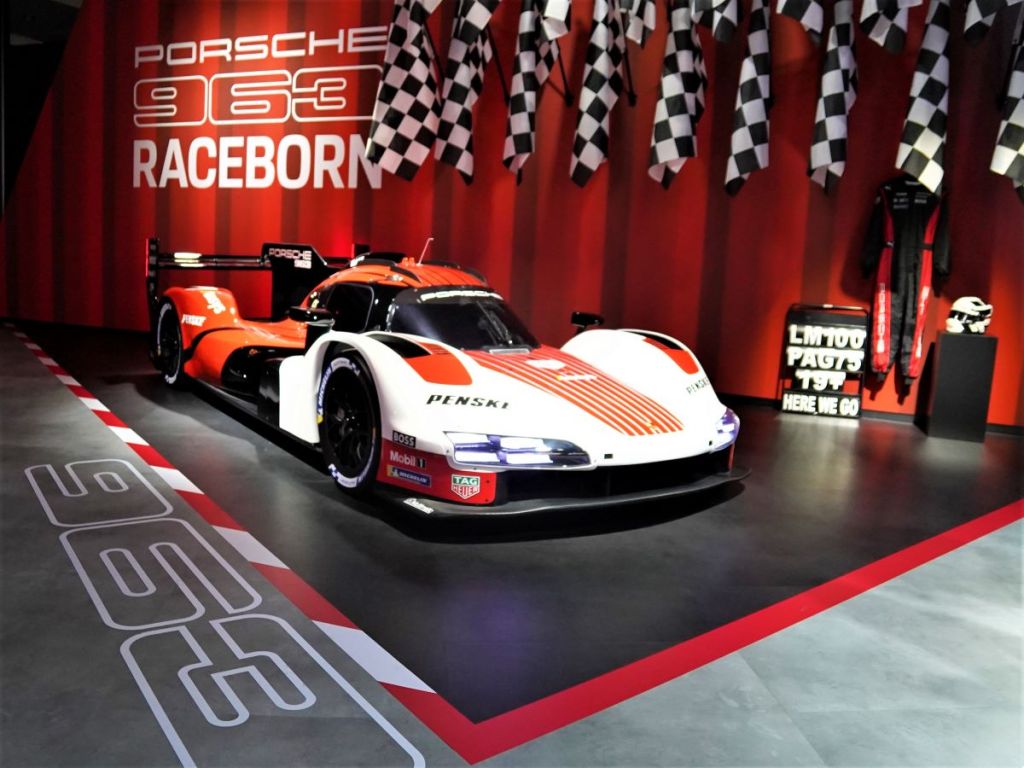 Fruits of developments between Porsche and Penske Motorsports were shown at AutoMobility LA 2022 (LA Auto Show Press Day). This will be the fourth manufacturer to join in the IMSA Series LMDh Class for 2023. This union is the second introduction by Penske Motorsport to the highest level of prototype competition, the first being the championship winning Acura – ARX–05.  Image Credit: Edmund Jenks (2022)

Last year, NTT INDYCAR SERIES driver Will Power showed the world how a less equals more strategy can deliver a season series  championship win (his career second). The WeatherTech GTP Class championship, however, has settled on a more equals less strategy to deliver a hybrid technology answer (more) to the reduction of carbon emissions (less) in a major professional motorsports competition series championship.

In a first of the new year ZOOM Call put on by IMSA, with the participants from teams representing the four major automotive  manufacturers who will be competing in the 2023 GTP class of the IMSA WeatherTech SportsCar Championship Series – Cadillac,  Acura, BMW, and Porsche – most all of the technical team leaders expressed a few common themes.

IMSA 101 – DPi cars are being replaced by LMDh cars for 2023 >>> an LMDh (Le Mans Daytona h) is a type of sports prototype race
car that will compete alongside Le Mans Hypercar entries in the Grand Touring Prototype (GTP) class of the IMSA SportsCar  Championship from 2023 – it also competes in the Hypercar class of the FIA World Endurance Championship.

The LMDh ruleset was created jointly by the International Motor Sports Association (IMSA) and the Automobile Club de l’Ouest (ACO). The cars will serve as the successor to the Daytona Prototype International class, utilizing regulations that were planned to become  the next-generation Daytona Prototype International ruleset, converged with the Le Mans Hypercar ruleset, showing off the latest technology in mating traditional internal combustion engines (ICE) with electrification (Hybrid Technology) – tap for more.
[ht: WIKI/IMSA]

In addition to having to integrate hybrid electric power units to the ICE power units (internal combustion engine) one has to consider what additional impacts will this have on a team as it prepares at the team shop environment, travel, and set-up at a track for testing and competition.

In another revealing “more” to achieve “less” observation, teams discovered an increased need to have staff, tools, and toolboxes be more clearly identified along the lines of power unit and process. For example, one team implemented having the toolboxes, as well as the tools color coded as to function between EV Hybrid and ICE applications.

Jonathan Diuguid (pronounced Do-gid), Porsche Penske Motorsport ended Part 1 with the one element to this racing equation that, in the beginning of any season is on the more side, tire compound choices that will deliver the fastest times with longer runs – less pit stops with less time involved with the completion of each lap.

Motorsports Journal/EVHNews was able to ask questions from Brandon Fry of RLL about how the new RLL HQ helps the BMW GTP  Class effort & Jonathan Diuguid about working with a manufacturer to introduce a racing effort to this level of championship racing series – first Acura, and now Porsche – these questions begin this next Part 2 video.

Join us on our ROAD TO DAYTONA for insights into the BMW M Hybrid V8 project.

Episode 2: Tested in all conditions.

Major concerns that are common with all teams and manufacturers as it relates to the level of confidence in the unknowns. Unknowns all track back to reliability during race day activities. As always, when something is new, one has no real idea if all of the bits, pieces, and tasked function parts will hold up to endurance race stresses and conditions. This is why we all push the limits of technology and application, this is why we race … isn’t it?